Aiken's Preakness Stakes Winners Exhibit      May 19 - June 8, 2017
On a late summer evening in 1868, an agreement among sportsmen to stage a special race to commemorate a
memorable occasion became the foundation for the middle jewel of racing's Triple Crown, the Preakness Stakes.
Governor Oden Bowie of Maryland, a horsemen and racing entrepreneur, was among the distinguished roster of guests at an elegant dinner party after the races at the Union Hall Hotel in Saratoga given by Milton H. Sanford, who had gained much of his wealth selling blankets during the Civil War. John Hunter of New York proposed that the feast be commemorated by a stake race to be run in the fall of 1870 for three-year old colts and fillies at two miles, to be known as the Dinner Party Stakes in honor of the evening. Bowie electrified the gathering by suggesting a purse of $15,000, a staggering sum in those days.
Governor Bowie requested that the Dinner Party Stakes be run in Maryland, and pledged to build a new racetrack to host it. Hence, the idea for Pimlico Race Course was born, and in the fall of 1870, the inaugural Dinner Party Stakes was run on Pimlico's opening. Won by Sanford's Preakness, one of only two male entrants in the seven horse field, the massive bay colt was a first time starter. His jockey, Billy Hayward, followed a unique tradition of the day after the race: would later be run at Pimlico as the Dixie Handicap (now known as the "Dixie"), and hold the honor of being the 8th oldest stakes race in America.
Two years before the Kentucky Derby would appear, Pimlico was busy introducing its new stakes race for three-year olds, the Preakness, during its first-ever spring race meet in 1873. Governor Bowie had named the mile and one-half race in honor of Dinner Party Stakes - winner, Preakness.  The scene was set for the first Preakness Stakes on Tuesday, May 27, a warm and muggy spring day at Pimlico. The crowd, well aware of Bowie's accomplishments in putting Baltimore on the national Thoroughbred map, swelled to 12,000. The violet-painted stands and the Victorian Clubhouse, which survived until a fire destroyed it in 1966, were decorated with the Maryland Jockey Club blue and white pennants.  The first Preakness drew seven starters, but it was John Chamberlain's three-year old, Survivor, who galloped home easily by ten lengths to a purse of $2,050 to this day, the largest Preakness margin of victory.
The early Preakness Stakes attracted quality horses and good crowds; however, in 1889, due to changes in the racing industry, the Preakness and Pimlico galloped to a halt. In 1890, the Preakness was run at Morris Park in New York. The Maryland Jockey Club continued to be involved in racing by presenting some steeplechasing and even trotting races at Pimlico, but the Preakness did not return home to Pimlico until 1909. During this interval, the Preakness was run for 15 years at the Gravesend track in Brooklyn, New York. These 15 so-called "lost" Preaknesses were officially enrolled in the race history of the classic in 1948; the 1890 Preakness was added in the 1960's.
From that day in 1909, the Preakness has run without a break each year at Pimlico, steadily growing in popularity and purse value. It was once said that having the Preakness in Baltimore is like being able to schedule the World Series or Super Bowl every year.  The Preakness Stakes has remained throughout history a true test of a horse's ability and class, a race where remarkable horses meet one another other in a great classic.
Aiken’s Preakness Stakes Winners
Three Preakness Stakes winners​ have trained at the historic Aiken Training Track. Click on the photos to the right to learn more about each winner.
1

Click here to learn more about the Preakness Stakes! 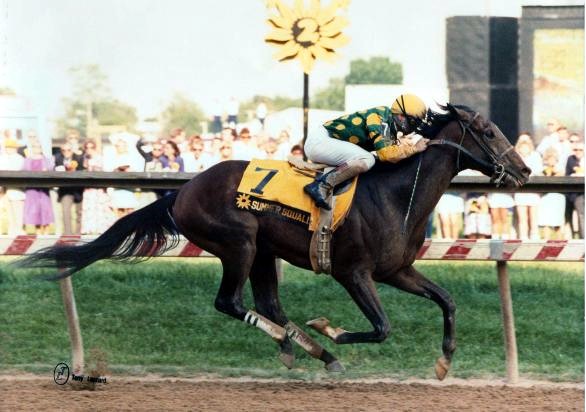