The Aiken Thoroughbred Racing Hall of Fame began as an idea of the Aiken Jaycees. The Jaycees wanted to established a lasting tribute to the famous horses that trained in Aiken and the equine industry that has long played an important part in Aiken’s history.
The first hurdle that needed to be cleared in the completion of this project was to find a location for the Hall of Fame. The Carriage House, built in 1902, at Hopelands Gardens was chosen for two reasons. One, it was the location of a public garden owned by the City of Aiken. Secondly, Hopelands was the former estate for Mrs. C. Oliver Iselin, a noted horsewoman who owned stables in America and England, who was a Winter Colony residents, as were many of the owners, breeders, and trainers of the horses that were inducted.
The Jaycees then went before the Aiken City Council to ask permission to utilize the Carriage House for the Hall of Fame. The Mayor and Council eagerly supported the project. The project floundered for about a year until help came from Mr. and Mrs. Whitney Tower.
Mr. Tower, at the time, was the Vice President of the National Racing Museum and Chair of the Hall of Fame that is located in Saratoga, New York. He was also the horse racing editor for Sports Illustrated and later the turf writer for Classic Magazine. Mr. Tower help compiled the background information on the first horses that were to be inducted. His wife, Joan, became the chairperson of the Fund Raising Committee. Through her efforts, the Aiken City Council, on May 18, 1976, donated $ 5,000 towards the renovations of the Carriage House and the remaining funds, $ 15,000 was raised through donations from the Aiken Community and the Aiken Horse Industry. The Aiken Jaycees, at the conclusion of the renovations, contributed over $ 10,000 in labor and material costs.
The Grand Opening for the Hall of Fame was Sunday, January 23, 1977. Some of those in attendance were Mayor H. O. Weeks, John Surles, a former president of the Jaycees and chair of the Hall of Fame Development Committee, Mrs. Whitney (Joan) Tower, chairperson of the Fund Raising Committee, and James D. McNair, a Hopelands Trustee. Monsignor George Lewis Smith, an active rider, gave the dedication prayer. Many of the world’s best trainers, John M. Gaver, MacKenzie T. Miller, James W. Maloney, E. Barry Ryan, Virgil W. Raines, Willard C. Freeman, Mrs. William Post, and Mrs. J. D. Byers, (who represented their husbands), were present to see their charges inducted into the Hall of Fame.
The horses that were inducted into the Hall of Fame on the Grand Opening were Sensational, Snow Knight, Shuvee, Hawaii, Stage Door Johnny, Quick Pitch, Gamely, Open Fire, Assagai, Lamb Chop, Barnaby’s Bluff, Kelso, Neji, Tea Maker, Tom Fool, Oedipus, Capot, Blue Peter, Conniver, Gallorette, Devil Diver, and Elkridge. Since opening, eighteen more horses have been inducted into the Thoroughbred Racing Hall of Fame.
The first exhibit to be shown at the Hall of Fame Gallery was the paintings and sculptures of the world renowned equine artist, John Skeaping. This exhibit was provided through the courtesy of the Essex Gallery in Far Hill, New Jersey for the Grand Opening.
History
Aiken Hall of Fame Article - Thoroughbred Record February 2, 1977.pdf 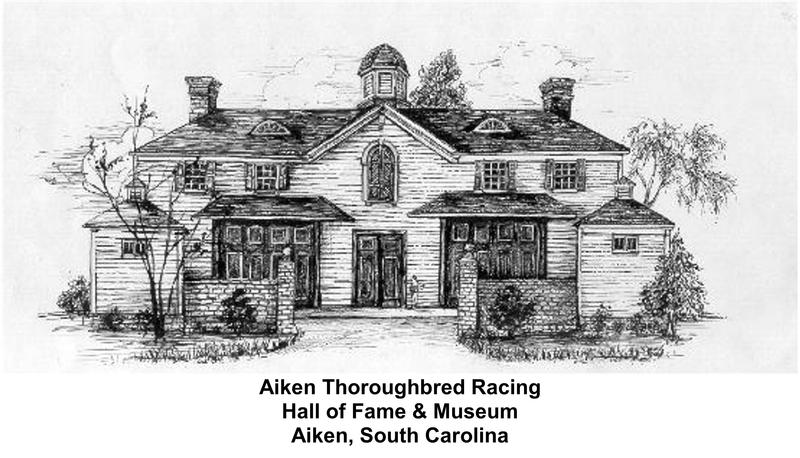